Semicarbazide-sensitive amine oxidase (SSAO) is a common name for a widely distributed enzyme in nature. In man this enzyme is present in the vascular system and circulates in plasma. SSAO differ from the monoamine oxidases A and B in substrate and inhibitor patterns. These enzymes have been widely studied and their tissue distribution, molecular properties, substrate specificities and inhibitor sensitivities are extensively reviewed (2,3). SSAO exists in two forms: tissue bound and soluble (plasma SSAO). Tissue bound SSAO acitvity is associated with blood vessels, mainly in smooth muscle layers, however it is also associated with spleen, placenta, bone marrow, kidney, sclera, retina, endothelial cells, adipocytes, chondrocytes and fibroblasts. (4,5). Evidence suggests that Plasma SSAO originates from the cleavage of membrane-bound form. The possible sources of plasma SSAO are still unclear, but it has been suggested that it may be derived from liver, retina, placenta and bone tissue (6,7,8). SSAO’s functional role has been suggested to be involved in: apoptosis, atherogenesis, cell adhesion, leukocyte trafficking, glucose transport and local production of hydrogen peroxide. Reports of elevated levels of SSAO have been reported in congestive heart failure, diabetes mellitus, alzheimer’s disease and various other inflammatory diseases (1). Furthermore byproducts of SSAO deamination, such as formaldehyde and methylglyoxal, have been proposed to be involved in pathogenesis of cancer, aging and atherosclerosis. The Fluoro SSAO detection kit utilizes a non- fluorescent detection reagent, to detect H202 released from the conversion of Benzylamine to Benzaldehyde via SSAO. Furthermore H202 oxidizes this detection reagent in a 1:1 stoichiometry to produce a fluorescent product resorufin. This oxidation is catalyzed by Peroxidase. 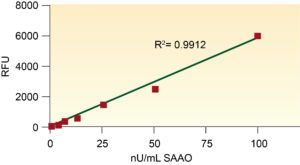