The role of pyridine nucleotides (NAD/NADH) metabolism in health, is of continual and increased interest. A growing amount of evidence supports the fact that NAD metabolism regulates important biological effect including life span. NAD, through poly-ADP-ribosyl polymerase (PARP), mono-ADP-ribosyltransferase (ARTs) and recently characterized sirtuin enzymes, exerts potential biological effects. These enzymes modify proteins to regulate their function via ADP-ribosylation or deacetylation and are involved in several pathways including apoptosis, DNA repair, senescence and endocrine signaling. This suggests that either the enzymes or NAD could be an important therapeutical target 1.

The Fluoro NAD/NADH detection kit utilizes a non-fluorescent detection reagent, which is reduced in the presence NADH to produce its fluorescent analog and NAD. NAD is further converted to NADH via an enzyme coupled reaction. The enzyme reaction specifically reacts with NAD/NADH and not with NADP/NADPH
Reaction: 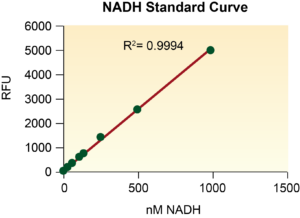 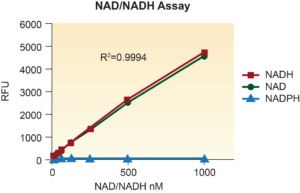