Eosinophil peroxidase (EPO) is the most abundant enzyme found in eosinophils. It is the major cytotoxic agent released by activated eosinophils and uses hydrogen peroxide to generate reactive oxidants from halides and pseudo halide thiocyanate [1,2]. Eosinophils peroxidase has been shown to have antimycobacterial activity [3], however it is also implicated in tissue damage that occurs in asthma and other diseases [4,5]. Currently, the function of eosinophil involvement in the immune response is being redefined. Once considered a cell involved in host protection of parasitic infection, eosinophils multiple functions as leukocytes involved in the initiation and propagation of diverse inflammatory responses are being investigated. Eosinophils are further involved as modulators of innate and adaptive immunity [6]. 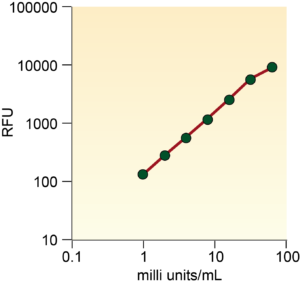 Figure 1. Eosinophil peroxidase was titrated in 1X reaction buffer and 50uL of each point was added in triplicate to 96 black wells. 50uL of reaction cocktail was added and the reaction was incubated in the dark at room temperature for 30 minutes.

Fluorescence was read at 530nm excitation and emission detected at 590nm.