Catalase is an antioxidant enzyme that catalyses the decomposition of hydrogen peroxide (H202) to water and oxygen. Catalase is ubiquitously expressed in mammalian and non-mammalian aerobic cells containing the cytochrome system. The enzyme has been isolated from various sources, including bacteria and plant cells (1-3). Catalase activity varies greatly from tissue to tissue. Highest activity is seen in liver and kidney, while lowest activity is seen in connective tissue (3). In eukarotic cells, catalase in concentrated in organelles called peroxisomes (4).

The production of hydrogen peroxide in eukaryotic cells is an end product result of various oxidases and superoxide dismutase reactions. Accumulation of H202 can result in cellular damage through oxidation of proteins, DNA and lipids thus resulting in cell death and mutagenisis (8-11). H202 role in oxidative stress related diseases have been widely studied (8,12).

The Fluoro Catalase detection kit is sensitive assay that utilizes a non – fluorescent detection reagent to detect H202 substrate left over from the catalase reaction (5-6). 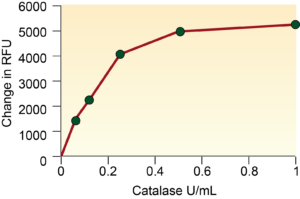 The reaction contained 20uM H202 (final) per well and the indicated amounts of catalase in 1X reaction Buffer. The reaction was incubated for 30 minutes at room temperature.

Next, 100µL of Reaction cocktail was added to each well and the reaction incubated for another 10 minutes in the dark at room temperature.

Fluorescence was measured at excitation 530nm and emission detected at 590nm.

The graph reports the change in fluorescence, observed fluorescence from negative control (no catalase) minus catalase sample fluorescence.