Exposure to chemical nerve agents, pesticides and certain drugs (anesthetics, cocaine and therapeutical drugs) reduces the activity of red blood cell (RBC) acetylcholinesterase (AChE). The RBC-AChE can be used as a biomarker to monitor suppressed and or increased AChE function in the peripheral and central nervous system (9). Acetylcholinesterase (AChE) is one of the most important enzymes involved in nerve transmission. The enzyme is bound to cellular membranes of excitable tissue (synaptic junction, endoplasmic reticulum, etc) 1-3. Acute toxicity to humans and animals through inhibition of AChE by both nerve gases and an important class of pesticides has long been a field of intensive scientific investigation 4,5. AChE inhibitors have also been used clinically as Alzheimer’s treatments (e.g., tacrine (tetrahydroaminoacridine)) 6 and are the subject of increasing interest in various disease processes and treatment strategies 7,8. However, both environmental detection of AChE inhibitors and development of modulators of AChE enzymatic activity as drugs have been hampered by the difficulty and complexity of the current assay methods.

We have developed a highly sensitive, very rapid, extremely simple assay to determine acetylcholinesterase activity in RBC’s, using the natural substrate, acetylcholine. Additionally, by using specific inhibitors, the kit can be used to detect AChE activity in a variety of samples. A series of coupled enzyme reactions quickly translates the presence of active AChE into a change in the fluorescence of a quenched detection reagent. 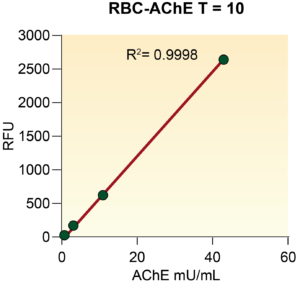 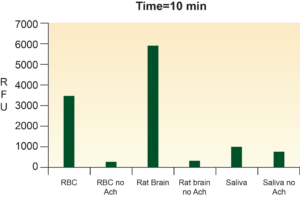 Gonadal hormones modulate the potency of the disruptive effects of donepezil in male rats responding under a nonspatial operant learning and performance taskAcetylcholinesterase, a key prognostic predictor for hepatocellular carcinoma, suppresses cell growth and induces chemosensitization